skip to main | skip to sidebar

If you would like to know more than get a copy of this months "Period Home and Interiors". There is a magnificent 6 page article (starting from page 62) written by period house expert Melinda Varcoe after her recent visit. With more photos and lots more details its a great bin read in this excellent magazine. 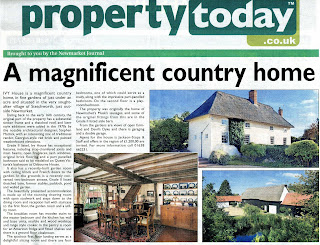 If you would like to own a magnificent piece of English history this 16th century farmhouse is now on the market. For more information you can visit the agents site for Whatley Lane or call their offices on 01638-561187 or call in at 13 High Street, Newmarket CB8 8LX
Posted by Jeff Fenton at 02:51 No comments: 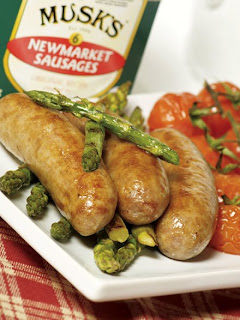 Nowadays the sausages are made in Newmarket to Elizabeth and James' secret recipe by Musks Limited at a clean, modern factory with A Grade BRC accreditation They still feature heavily on the breakfast tables of Royalty, around Newmarket and much of England. Musk’s eponymous sausages are renown all over the world.

Musks Limited exclusively owns the secret recipe and rights to the Musk’s name.

Ivy House Farm is now a private residence and the lands around it that were park of the pig farm have either been developed into housing or absorbed into the Duke of Sutherland's Stetchworth Park Estate Farm. Musk’s former Newmarket shop has become a branch of the Nationwide Building Society with the decorative frontage still intact and a blue plaque commemorating its former life!
Posted by Jeff Fenton at 08:34 No comments:

The Musk's home in Stetchworth was known as "Ivy House Farm". The main farmhouse and barns were situated at 23 High Street, Stetchworth and occupied fields and buildings on both sides of the road. The pigstys were across the road from the farmhouse and this site was developed in the late 1980s into a small housing estate. 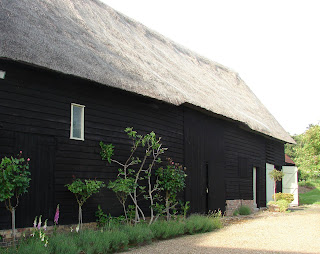 s later handed down through the generations. So successful was the recipe that the couple became very prosperous and opened their third shop on Newmarket High Street in 1905. But this must have been a strain for James Musk who dies later that year.


Next to the house was a mid 17th century timber framed barn (see right) with weather board on a brick plinth. The barn is thatched with a hipped side purline roof with four bays and double doors with opposing gable outshut. A gable extension was built on the north side in the 19th century as a slaughterhouse with original wheel for trussing carcasses (see below) in situ (English Heritage ref 49232)


It seems probable that, in the 1880s, the Musks build a major extension to the barn for use as a slaughterhouse. The slaug 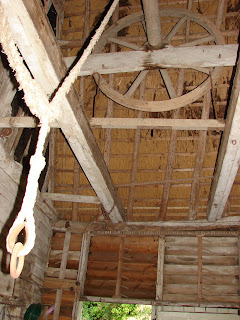 hterhouse stands to this day and the equipment for dispatching the pigs (see picture left) is still there and in working order. However, the last pig was killed in 1928 when the slaughterhouse was finally closed. Pig bones and teeth can still be dug occasionally up in the garden. The barn, which is also grade 2 listed, has some unusual features. The slaughterhouse has louvered wooden slats which can be opened by turnin 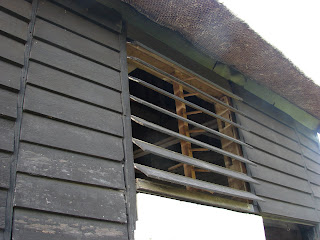 g a central wooden post in each "window". This allows fresh air to flow through the slaughter-house area which, with many terrified pigs about, would have smelt awful. The pond outside was dug for chalk to make lime to dispose of the inedible remains which, in Victorian times, would have been very little.

The house also has a Victorian extension shown right, which may have b 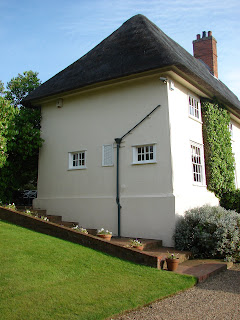 een added by the Musks. The 1891 census shows a "Master Builder" as lodging with the Musks. Was he responsible for the house extension and the barn?

Ivy House Farm is now a private residence but retains the charm and Victorian look of its illustrious earlier residents. After the Musks left it became the home of the Dowager Countess of Elsmere who lived there until the early 70s when the building, in real need of updating, was tastefully and accurately restored by the renown local architect Stephen Mattick.

The kitchen top is old marble allegedly from the butcher's work surfaces of the Musks. Perhaps Elizabeth's first "Newmarket" sausage spices were mixed there?
Posted by Jeff Fenton at 08:19 No comments:

So highly sort after were the sausages that Musk’s, then managed by Louis Frederick Drake, received their first Royal Warrant in 1907 granted by George (Prince of Wales later to be King George V) and converted to the King’s Warrant in 1911 as suppliers of Pork Products. So famous was Musk’s the Butchers that Stetchworth villagers claim pork and sausages were regularly produced and shipped to Buckingham Palace and Balmoral Castle by train.

The business was inherited by Louis Frederick's son Louis Gilbert Drake and he received further Royal Warrants in 1929 from Edward, Prince of Wales (later the Duke of Windsor), and 1965 from the late Queen Elizabeth the Queen Mother .

The Musk’s shop finally shut it’s doors on 26 May 1979 and and the secret recipe was sold by auction to Amanda Clarke who, with her manager Mrs Waddilove, established a new delicatessen in The Rookery. This shop was sold in the early 1990’s to Lord Ronaldshay, who must be given credit for building the present factory. He split the factory from the shop and sold the latter to George Vesty. When Lord Ronaldshay moved back to Yorkshire the recipe was passed on to Musks Limited who still produce Newmarket sausages to the original recipe. A further Royal Warrant was granted by Her Majesty Queen Elizabeth II in 2005 with deliveries being made to Sandringham in Norfolk over Christmas.
Posted by Jeff Fenton at 08:14 No comments:

Newmarket Sausages - How they started

Very quickly after their marriage things changed at the Musk's butchers business. Their outlet in Tea Kettle Lane in Stetchworth became Musks the Butchers and within a few years Jim had opened in the nearby town of Newmarket. And they started to sell their own brand of sausages that were mixed with a secret range of spices. Elizabeth Musk mixed these in their Stetchworth farmhouse on her kitchen work-tops. These were then rushed to Newmarket and made into sausages. 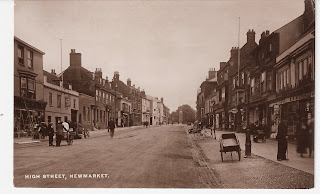 The reputation of these sausages spread and the Musks became very very successful, moving in 1905 their butchers shop to a prime location on Newmarket High Street (see picture right) where it remained until 1979 when it was finally forced to close. Jim's step-sons came into the business and Louis Frederick Drake ran it after Jim died in 1905.

The big question that remains unanswered is who invented the recipe? Elizabeth, as a Drake, had been selling pork products in Stetchworth for some time. The sausages appear soon after their marriage. Was it really a Drake Sausage? Or did James bring the secret, perhaps from working in Chiswick? Probably we will never know.
Posted by Jeff Fenton at 07:55 No comments:

Born in Newmarket, in 1848 she married Edward Drake and by the 1880s they were tenant pig farmers in the small village of Stetchworth just outside Newmarket (3 miles) on land that belonged to the Earl of Elsmere (today the Duke of Sunderland, the UK's wealthiest man and biggest single land owner according to the Sunday Times Rich List)

On 13 December 1882 her first husband, Edward, died and this left her in difficulties as any woman with 4 children (3 boys and a girl) running a large farm with Victorian attitudes to women to contend with.

Her "solution" was to marry James (Jim) Musk. 10 years her junior. The were married at St. John's Church in Depford in Kent on 18 June 1884. This in itself is unusual. They were both local to Stetchworth (James had been born there) and were supporters of the village churches. So why not marry locally? The obvious assumption is that the marriage was frowned upon by their family and friends., although her father, William Cooper was a witness as was Annie Musk (probably James older sister).

In the 1891 census Mrs James Musk and her new husband are found living in Ivy House in the High Street at Stetchworth with a household of 8 people (+ a visiting builder) including Elizabeth's mother (Sarah?), the two youngest of the Drake's children (Edward Drake is shown as a butcher's assistant) and servants and staff. This means they were very prosperous for the time.

She was widowed again in 1905 but left apparently very well off. Her eldest son Louis Frederick Drake inherited the shop Musks on Newmarket High Street (Elizabeth and James had no children) and James Musk left money to all his family.

Elizabeth died on June 15th 1930 and was buried with her first husband (as was the tradition) in Stetchworth parish church
Posted by Jeff Fenton at 07:47 No comments: